Lately, I haven't posted anything. I'm not totally certain I can settle on a singular reason for doing so, but it's somewhere in the murky waters of 9-5 purported apathy, a lack of confidence in my quantification of musical qualities, or some other vague sense of literary dejection. Either way, I've just not been feeling much propulsion behind my fingertips when the keyboard is adjacent. None of which is to say I've been listening to any less music than I ever have - my aural input is consistently huge - it's just that acting as anything but a spectator has felt like a chore recently.
Also, I quit my job, cut all my hair off, and am days away from traveling like a vagrant.
But enough about me, let's talk about
Nah, let's continue talking about me. Last year, two of my friends headed down to Baltimore for the Maryland Deathfest VII - a 3 day "extreme music" festival featuring an all-star cast of punk, grind, black/death metal, and powerviolence groups from around the world, and one of which I was too broke to attend at the time.

Actually, that's bullshit, I could've made it I had the mind to, but at the time, my interest in these particular branches of extreme music sunk down to primordial depths; so low in fact, that I could hardly stomach the idea of spending three full days bludgeoned by the soundtrack to 3/4ths of my high school career. I even performed a mighty cull of my itunes library, eliminating all but a handful of artists eligible for gatherings of the MDF variety.
In retrospect, I was clearly deluded and potentially hazardous to those cohabiting. If you've ever performed such rash processes of elimination, you'll surely get where I'm coming from, as it never takes long to regret your decision and begin a descent into self-mutilation as restitution. I dunno. But hey, check out this gorgeous lineup I could've lived without witnessing for a pathetic 115 dollars:
Pestilence
Bolt Thrower
Asphyx
Napalm Death
Atheist
Absu
Immolation
Brutal Truth
Venomous Concept
Abscess
Birdflesh
Pig Destroyer
Grief
Devourment
Flesh Parade
Catheter
Jig Ai
Margrudergrind
Agenda Of Swine
Crowpath
Kill The Client
Maruta
P.L.F
Despise You
Weekend Nachos
Splitter
What the fuck, man. I was an anus for passing this up, even if just Devourment (who's track record includes one of my all-time favorite albums with Molesting The Decapitated), Weekend Nachos (a fantastic powerviolence band notorious for their spasmodic live performances), Crowpath (at the forefront of forward thinking heavy music), Immolation (perhaps the most consistently excellent band in their gene pool), and Grief (a cranium cave-in of sludge) crawled out of a ludicrously skyscraping tour van pile-up featuring the entire roster. Luckily, I was panned over by this all-encompassing sense of regret shortly after the opportunity was lost to time and ordered tickets to 2010's shindig within a week of the line up's confirmation. Little did I know at the time, everything in the entire universe fucking blows. Everything. There's not an iota of solace to be found across the face of time and space. As such, I discovered my tickets were chilling atop my dresser only after myself, buddy Steve, and buddy Logan exited New York, traversed the entirety of Piece Of Shit (New Jersey, colloquially), signed in at the reception desk, nabbed a few grams of Bolivian marching powder and a cheap trick, and began walking up the block to the festival.
IN SHORT: after waiting in line for at least 15 minutes, wracked with fear that their would be no 3-day passes available and Steve high-fiving the dude from Cannabis Corpse, some true American hero and his buddy shot past us offering up an extra ticket, fellatio was performed, and I entered the festival 100 lbs. of anxiety and self-loathing lighter. 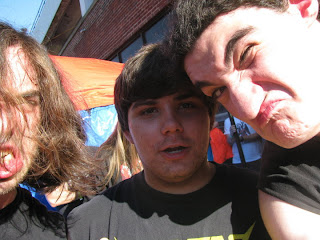 Apparently there was actually a performance the night before the festival officially commenced, but due to our collective ignorance, we passed up Birdflesh, P.L.F, General Surgery, and fuckin' Iron Lung, consarnit. Fortunately, this was just the tip of the 'berg of stationary hydrogen molecules, as the preceding days contained as much ass-blistering madness as one corporeal body could endure before total deliquesence.
The adjacent snapshot illustrates just some of the effects of such exposure to such rocktensity.
(not pictured: concave buttocks from severe hindquarter-boot exposure)
Gorguts - Decent show from a great band. Probably would've helped if we could hear anything during the first half of their set.
Autopsy - Similar fate as the above, but we tunneled through the flesh wall to remedy this. Played the classics to get the honey's bumpin'.
Obituary - Ruled. Illustrated exactly how a live band should sound - amped-up, more intense versions of their studio work. Steve (center) moshed for Satan throughout the duration of the set.
Entombed - Sucked. They played "Crawl" from the EP of the same name, but the remainder of the set was devoted to the shitty powerchord "death 'n' roll" style that dominates the bulk of their releases.
D.R.I. - Sounded great and played some of their best shit, yet we turned in like a bunch of bedwetters. Whatever, I was too sluggish to brave their pit for more than a few minutes anyway.
Asphyx - Fucking killed the shit out of our shit. Mosh pits are especially brutal when performed on the side of a blacktop hill. Even when the material was unfamiliar, the thick, crushing, grooves and the full on blasting made it incredibly easy to get into.
Repulsion - Eh. I dig Horrified, but constant high speed assaults from a great enough distance to totally muddle the sound don't really get the blood pulsing.
Pestilence - Ruled. Stuck primarily to their gritty, crushing, straight-up death metal material with only one or two forays into the proggy sound of their later works.
Eyehategod - One of the highlights for me, which was especially satisfying considering their position among my favorite bands of all time. They played all their best shit, and played it with gusto.
Watain - Caught about 3 minutes of this. Just sounded like humorless, deadpan, melo-black metal to me, but I suppose I wasn't witnessing them in the best window of opportunity.
Incantation - Eh. I love Incantation on CD, but I can't say I remember a second of this one.
Sinister - Weak, lifeless, performance of their later, drier, material. Coulda lived without this one.
Deceased - Considering that I'm unfamiliar with pretty much all but their debut, Luck Of The Corpse, it was rad that these guys played quite a few numbers from said album, being it's somethingsomething anniversary. This one was a lot of fun, and super energetic.
Blood Duster - These guys were fucking awesome. Lots of inflatable shit being throw around (including a giant, smiling, penis) and the introduction: "This next song is about stomping in piss. It's called "Piss Stomper".
Impaled - Decent, but kinda underwhelming considering the hype I read up on regarding their live shows.
Coffins - Really great shit. I spent the show swaying to the crushing doom or full body rocking to the more punkish, up-tempo, numbers.
Capitalist Casualties - THE highlight for me. They played the second to last spot on the third night, so Logan and Steve turned in, unfamiliar with the band. I thrashed my ass off and ended up getting picked up by this monster truck of a man and thrown into a bunch of crusty girls. Fucking awesome.
Gride - High paced Czech grind antics made for a fucking spastic mosh pit. I'd forgotten about these guys, but the show inspired me to track down their catalog again.
Gridlink - These guys are ex-Discordance Axis, and as such, follow suit with the group's final sound niche, but advance the technicality to even more ridiculous heights. Unfortunately, they just sound like an amplified blender live.
Captain Cleanoff - Awesome, tight performance by the absolute best grindcore band running today.
Rompeprop - A fucking party of dumb, chunky, goregrind heralded in with an overlong intro of some goofy Dutch traditional number. A cover of Steppenwolf's "Born To Be Wild" sealed the deal.
Gorod - Missed all but a few minutes of these guys. Super high musicianship, lower competence in songwriting. Whatever.
Malignancy - Nothing I was too familiar with, but fun nonetheless. More pinch harmonics than Zakk Wylde imitating a laser blaster. Vocalistman brought the giggles.
So hey, that sums up the Deathfest. I hope the stragglers enjoyed quickly skipping over this mess to resume their everyday tasks. Stay brutal.
Posted by Steev Hyooz at 9:33 PM No comments: