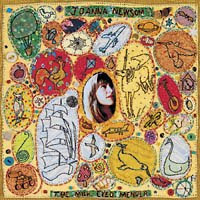 I've been planning to detail and share the exploits of early Shimmy Disc quynamic quintet Fly Ashtray and their first long-player, Clumps Take A Ride for a week or two, now, but when one witnesses a multitude of mud wasps take up residence in a grown man's urethra finds a deliciously engaging new album saturating his earbuds, one is obligated by the laws of human nature to cancel any prior engagements to share word of one's find on one's shitty, inconsistent music blog. Anyhoo, today's star is the less-than-obscure, likely Pitchfork approved, Jimmy Kimmel Show-guest-starring, and certainly less eardrum battering debut by Joanna Newsom - a harp strumming 20-something lass WHO CAN STRUM MY HARP ANYTIME YOUKNOWUDIMSAYIN' HEUHVFHf with a mouthful of wonderfully poetic lyrics and a throatful of Betty Boop's vocal chords. Sound like an unappealing trait? Try braving The Crucifucks' discography beforehand. It'll certainly make her unconventional timber and cadence a walk in the park or atI'D TAKE A WALK IN HER PARK IF Y - alright that's quite enough blue commentary masked with strike-out text.
The music itself alternates between beyond delicate harp picking world music-esque folksy numbers to noisier, oddly tuned piano and harpsichord based songs (if that gives you any indication of the harp tracks' fragility) without a dabble or a venture into the percussion realm.
So why the EXTRAORDINARILY SOUGHT AFTER place in my blog?
The songwriting, maaaaaaaaaaan. Totally top-fucking-notch songwriting here. As much as I love being Mr. Subversive To Mainstream Culture, there's not a sour note on here. Brilliant little shards of harp twinkles and vocal/lyrical hooks get caught in your cranium on first listen like little aural thistles and help anchor the listener (me) down for future listens, during which the full majesty (hyperbole) of the songs come to light (penis).
Without further uh-dew:

Also: I urge you to slap down a few greenbacks to pick up her catalog. Newsom's an active artist with an easily obtained handful of albums to ingest - you'll have no excuse when the ePopo bash in your head with internet justice if you don't use my upload as a sampling, then be rid of it. Saying these things will lift my responsibility in the matter, right?

Alsoalso: the entirety of the web is seemingly obsessed with her hindquarters. 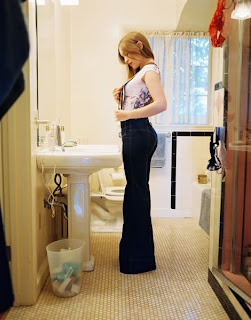 Yep.
Posted by Steev Hyooz at 8:33 PM No comments: 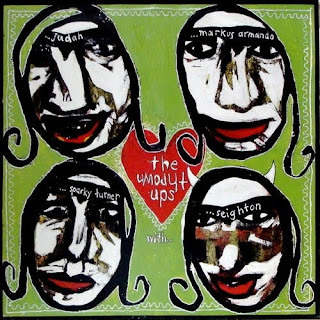 Before we begin, I have a little experience I'd like to share. Like anyone who's ever scoured the internet for sessions of brain-expansive acculturation, I opened youtube and headed for the Linkin Park videos. In my quest to befriend kindred spirits across pre-teen America, I accidentally let slip what I now know is a particularly unpopular opinion amongst Linkin Park fans. Observe, if you will, my stance on the song "Hands Held High":

Now instead of kindly agreeing to disagree, those who were near unfathomably at ends with my harmless comment rebutted with libelous claims about not only my intellect, but my sexuality, interpersonal relations, and even my psychosomatic development! What shame I felt! But it was the following that lanced my heart with truest aim:

Two individuals distanced by miles - one accusation skimming across their souls. Maybe I'm just a tad outside of the Linkin Park hip-mispelling-fluent fan club, but what the fuck am I reading? Shouldn't insults be somewhat universal when directed at strangers purely for retort? Or at least, be topical enough to make sense of? I mean, if it weren't for the context, I'd find it pretty damn impossible to to feel derided by these words at all. What's even more unsettling to me is the fact that I have - believe it or not - cashed hundreds of cheques at the bank (where else?) and mayhaps, once or twice, emitted a bemused chuckle or two at the fact that I have money to do stuff with. But "respect"? If by "ask" they're implying that I verbalize my desire to be treated in a dignified manner by the clerks, than no, I have never hit the spirit. Of course I expect courtesy, and as far as I'm concerned, the tellers deserve the same.

But enough puzzling over life's greatest mysteries, let's talk about The Thrown Ups.

What we have here is the sole LP-size recording of the band best known for assembling the prime components of Mudhoney - Melancholy Girlhole. Now everyone in the entire universe knows that Mudhoney was a monotonous waste of time for the majority of their career, but don't let that chafe your keister - the Thrown Ups were an entirely different breed of punk-reactionaries, caught up somewhere in the primordial murk of Harry Pussy, the first Meat Puppets album, and the retarded blues-rock of Jon Spencer and Pussy Galore. Throw in some Happy Flowers-esque psychosis, too while you're at it also as well if you'd prefer. Melancholy Girlhole is 13 songs in little under 26 minutes of prime-cut, scatological rock-slop garbage that sounds a whole lot more fun and listenable than you'd expect from a collective whose initial goal was to "be a band that never practiced or wrote songs".
See for 'yaselvz:

Oh yeah, I also added an entry for Noothgrush, but since I started writing it in September, it didn't show up right after my post on Universal Congress Of. Shucks.
Oh, and here are the boys in adorable flower costumes:

Posted by Steev Hyooz at 9:18 PM No comments: